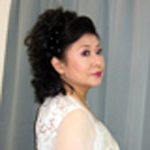 Taemi Kohama received her bachelor and master degree from Tokyo University of Arts, after which she studied under Ryosuke Hatanaka. While in graduate school, in 1984, she was invited by Elisabeth Schwarzkopf to study with her in Switzerland. She studied also at the Zurich University of Music as a scholarship student of the Swiss government, and studied Italian opera under Antonio Tonini in Milan.

In 1985 she made her debut in “Lieder abend” in Zumikon, Swiss. In the same year, she won the first prize in Salzburg competition, Austria. ln 1986 she was invited to “Lieder abend” in Aldeburg, England. After that, she took first place in the Japanese Music Competition. The following year, she studied under Teruko Ono, converting from mezzo soprano to soprano. In 1988 she took honors at the Pavarotti Competition, in 1989, the Tokyo international Competition, and in 1990, 6th prize in the vocal division of the 9th Tchaikovsky Competition. From 1992 to 1993 she studied in italy under a scholarship from the Japanese Ministry of Education.

She made her debut with the Fujiwara Opera in 1990, singing the title role of ” Madama Butterfly” and Donna Anna in “Don Giovanni” (Conductor: Bruno Aprea). In 1991 she did Desdemona in “Otello” (Conductor: Gustav Kuhn). In 1992 her appearance as a substitute in the title role of “Norma” won a storm of applause, she co-stared with three people of the first rank (Conductor Anton Guadagno, Singer:Ginseppe Giacomini and Carlo Colombara). Following this she sang Michaela in “Carmen”, participated in an Opera Gala concert and productions of “Macbeth” and Verdi’s “Requiem”, the latter conducted by Gustav Kuhn and also featuring Renato Bruson.

Returnig from Italy to Germany, she became an exclusive singer with Braunschweig Theater, making her European debut in the role of Elisabeth in “Tannhauser” in 1993. with 19 performances. In 1994 she sang of “Norma” in 16 performances. She stayed with the Braunschweig through the 1995-96 season, during which she also performed as Ariadne in “Ariadne auf Naos”, Flordiligi in “Cosi fan tutte”, Blumenmadchen of “Parsifai” and Saffi in “Der Zigeunerbaron”. During this period she was also invited by the Maldova Republic to sing “Madma Butterfly” and “Norma”(Conductor: Anton Zapf, tenor: Rene Kollo, and lots of famous musicians).

She appeared ln the first production of the New National Theater of Tokyo, which opened in 1997, as Elsa in “Lohengrin” (Director: Wolfgang Wengner). This was followed by her performence of the title role in “Madame Butterfly In the fall of 2000, she sang Tatiyana in “Eugene Onegin”(Conductor: Stefano Ranzani,director Vera Karpachova,singer: Paata Burchlaze). Again stepping in as a substitute for the lead in “Giovanna D’arco”, she drew critical acclaim in the role. ln March 2001, she sang in the Japanese opera “Kurozuka”

Taemi performed Donna Anna once again in “Don Giovanni” in the fall of 2001 at the New National Theatre. On February 10, 2002, she gave a recital at Tokyo’s Kioi Hall consisting of 14 songs in eight languages. The following May she performed an ambitious program of Wagner areas, including the parts of Senta from “Der fliegende Hollander”. Elisabeth from “Tannhauser”, Elsa from “Lohengrin” and lsolde from “Tristan and lsoIde”. She has sang in “Nabucco” at Suntory Hall in Tokyo,Beethoven’s “Ninth at Carnegie Hall in New York, at the festival of the Opera de Paris ballet company and in Brahm’s “German Requiem” at Sumida Hall in Tokyo. She has also appeared in many musical programs broadcast by NHK and other Japanese TV stations.

She has sung the role of Elvira in “Ernani” at Biwako Hall on October 26, 2002 and appeared in the Opera “Hikari” by Toshi lchiyanagi at the New National Theatre in January 2003. ln March 2003, she appeared in Bellini’s Norma at the Shinjyuku Bunka Center Hall, and sang in Verdi’s “l Vespri Siciliani” at BIwako Hail in November. ln January 2004, she has sung the role of Violetta in “La Traviata” (Conductor: Giuliano Carella, stage director: Beppe De Tomasi) at Orchard Hall, which got storm applause. 2004 fall, she had a spot in “I lombardi alla prima crociata”. She was invited to the Moldova opera festival, and in the title role of “Tosca” and gala concert. She co-started with Francisco Araiza in e opera “Madama Butterfly” “Lucia di Lammermoor”, and she had Morelia recital in Mexico. in 2005 she was in NHK new year opera concert, and on July She performed “Madama Butterfly” in the New National Theater. At fall. Taemi had a spot in “Stiffelio” at Biwako Hall. And she had a recital at Carnegie Hall in New York May 4th, 2006, and Taemi received a storm of applause and standing ovation.

Taemi has received the 3rd Muramatsu prize, the 20th Giroud Prize, the 1st Russian Song Prize and the Art Culture Prize of Yonden for 1996. She is a member of the fujiwara Opera.